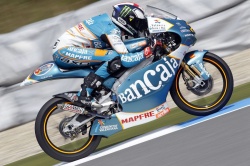 The 125cc World Championship contenders make their second intercontinental trip of the season this weekend with a journey across the Atlantic to the legendary Indianapolis Motor Speedway. The battle for the title remains wide open after a dramatic round in the Czech Republic that saw series leader Marc Marquez injured and Bancaja Aspar Nico Terol break the youngster's winning streak. It is sure to be another tense affair this Sunday, with last year's thrilling five-man battle over the final lap still fresh in the mind.

Terol came back from his own injury in better shape than ever to take a dominant victory and close the gap to Marquez to just 23 points, with 200 still up for grabs before the end of the season. The Spaniard now heads to the scene of his debut victory back in 2008 looking to move even closer to his compatriot in the rider standings and atone for a last-lap mistake that almost certainly cost him the win here last year. His team-mate Bradley Smith was one of the five riders involved in that epic battle last year, the British rider eventually taking second place. Smith dominated the weekend at Brno up until a weather-hit race and he is determined to bounce back with a podium this weekend.

Bradley Smith: "We had a fantastic weekend at Brno up until the Sunday, which was a disaster, so hopefully we can make up for it this weekend at Indianapolis. I am feeling very motivated and focused  - I need to have a good Grand Prix right the way through to the end. I have enjoyed Indianapolis every time we have been because I love the circuit and I actually hold the current lap record, although it is important we look to improve on it this weekend. I finished second last year after a great battle with four other riders so I know we can be fast there, we have a setting that works and so the main focus is to enjoy myself and get at least a podium."