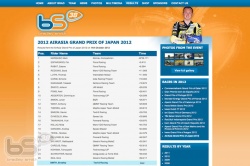 Tech 3 Racing Team rider Bradley Smith experienced a frustrating Grand Prix of Japan at the Twin Ring Motegi this afternoon after a mechanical failure denied him the opportunity to battle for a first Moto2 rostrum of the season.

The British rider has been one of the fastest and most consistent riders on track all weekend and he started the 23-lap race brimming with confidence after finishing second quickest in this morning's warm-up session.

Smith got a typically fast start from seve nth on the grid to immediately thrust himself into podium contention. The 21-year-old ended the first lap in fourth place but his race was to come to a premature and disappointing end when an engine failure forced him to retire on lap four.

Today's misfortune ended Smith's impressive record of finishing in every race in 2012, but he is confident he will able to bounce back quickly and show his true potential when the Championship resumes at the Sepang circuit in Malaysia next weekend.

Bradley Smith  DNF – 96 points:
“It is hard to put into words how frustrating it is to see a podium chance taken away in circumstances like that. We have all worked very hard to put ourselves into a great position to battle for the top three and then we don't even complete more than four laps. I was fourth on the first lap but I could already sense there was a problem and then it seemed to clear but on lap four the engine just died and it was race over. I'm very disappointed but at least we have the chance to bounce back quickly in Sepang next weekend. I just hope this wasn't my last chance to fight for a podium in Moto2.”

Herve Poncharal – Team Manager:
“I am very upset today because I think we have been denied the opportunity to fight for a podium through no fault of our own. A tyre issue cost Bradley the chance to go for the front row yesterday in qualifying and today I am absolutely 100% sure he would have been challenging for the podium and we had a problem with the engine. So to see Bradley forced out of the race is incredibly frustrating for him and the whole team. I am very sorry for Bradley because he was very fast all weekend and we were very confident he could score his first podium of the season. After all their hard work, Bradley and his crew deserved this and I am sure they will bounce back from this disappointment to battle close to the front in Malaysia.”