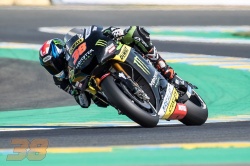 Bradley Smith suffered bad luck and unfortunately fell on lap 20 in the round 5 battle. The young British rider started the 28 lap sprint from the rear of the second row and bolted forward when the lights went out. He finished the first lap in 8th as he duelled with Valentino Rossi and then quickly set into his race pace. At just over half race distance he was running in 7th whilst maintaining his rhythm as he hunted down his teammate. However, several laps later the 25 year old fell at the 5th corner. Nevertheless, after the improvements made throughout the weekend in France, Smith aims to bounce back strongly at the next round at Mugello and challenge for the top independent rider honours.

Bradley Smith: – Position: DNF – Championship: 14 – Points: 20
"It goes without saying that it’s a frustrating end to the weekend, especially because it’s clear to see that it was the best weekend that we’ve had so far this year. I started well and the first ten laps or so were positive, but then I experienced a bit of a tricky period as I had a coming together with Pedrosa and I lost some time as I ran off track. However, after that, I felt that I was getting a second wind. I felt that my rhythm was getting stronger, plus I was able to improve my lap times so I focused on being as smooth as possible. At that moment, I saw that I was catching Aleix as well as Pol, yet I went too close to the limit as the front tyre was starting to drop away and I carried a bit too much corner speed so I rolled off the side of the tyre. I am very disappointed but more for the team than myself because they have put in a lot of effort and it would have been nice to celebrate with a strong result at our home GP. Nevertheless, I have to remain optimistic because until the race, it was a much better weekend than what we have experienced so far this season. At least we are back on track and next we go to Mugello, which is one of my favourite circuits on the calendar, with a MotoGP bike that I feel confident with. There is a lot of data that we can take from today’s race plus, there are a few adjustments to make because we always want to improve and I still feel that we can make a better bike. This will be the plan when we go to Mugello and we will see how we get on there."

Hervé Poncharal - Team Manager:
“In all honesty, I have mixed feelings about today’s result at our home Grand Prix, but I know that the guys really went for it and did their best. We were proud about having both the riders on the second row of the grid for the Monster Energy Grand Prix de France. This was almost like a dream, plus the warm up went very well, especially for Pol, so we were confident that a strong result was possible.  This Grand Prix looked like it was going to be the best for Brad since the beginning of 2016 and his qualifying was incredibly promising. Then, his race pace was consistent and looking good but I’m a little bit disappointed that he pushed that hard because the gap to the rider behind him was big and as a team manager I want to see both riders finish and secure some strong points. Nevertheless, Brad will bounce back and the most important thing is that both riders are fit and Mugello is approaching so hopefully we can have two good results there. Anyway, regarding the event this weekend, I want to give a big congratulations to Claude Michy for his organisation, plus to Yamaha for their result of 1st and 2nd, and I also want to say thanks to the incredible number of spectators who came which altogether made it a memorable weekend for MotoGP in France. Thank you.”