​Bad luck for Smith in round three battle 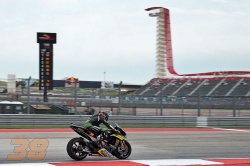 Bradley Smith suffered bad luck in the round three battle despite producing a thorough effort in the race. The young Briton began the Grand Prix from the fourth row on the grid after a determined display in qualifying yesterday. When the lights flicked off, Smith bolted forwards and quickly set into his rapid rhythm as he looked to clinch a strong point scoring finish. By lap 8, he was up to 8th and had closed in on the three riders in front of him yet, his luck ran dry and he fell at the 11th turn. Nevertheless, the determined 25-year-old remounted and pushed all the way to the chequered flag, but eventually completed the race in 17th due to a damaged gear lever. The 2015 fastest satellite rider will now seek to bounce back strongly at the next GP at the Circuito de Jerez.

Bradley Smith: – Position: 17th –Championship: 13th –Points: 16
"Unfortunately, today’s result wasn’t the best and all of our hard work was lost because of something that was out of our control. I lost the front at turn 11 due to an oil spill or something on the racetrack. It was just a little bit off the racing line and when Cal went down it caught me by surprise, so I released the brake. I was slightly off line, just like he was and I fell at the exact same place. This was frustrating because it wasn’t a mistake of my own, but this is racing and these things happen. I couldn’t really do much once I got back on the bike because I had a damaged gear lever, which made it difficult to shift, plus I also lost the anti-wheelie so the final laps were tricky to say the least. However, I was determined to finish because we had worked hard all weekend and overall there are still many positives to consider as we were definitely stronger at the beginning of this Grand Prix than we have been in the first two. So to conclude, I am happy with the final performance at this event, but I am disappointed that something silly like this ruined our race. Now, we have a lot of work to do to catch up on points in the championship but once we go to Jerez we will be ready to push forward again.”

Hervé Poncharal - Team Manager:
“What a weekend! The Circuit of The Americas is a really tough and difficult track plus the weather conditions weren’t easy, but in the end, I am very pleased with the outcome because it was a hard race. We gambled a bit with the rear tyre and decided to go with the soft compound option for both riders. Ultimately, I believe that it was that right choice as they were able to stay consistent until the final stages of the GP.  We knew that these first few rounds would be tricky with challenging circuits for us yet after all, it was always going to be very important to arrive in Jerez with a strong position in the standings. On the other side of the garage, it’s a big shame about what happened to Brad because I feel that we could have had another solid team result. For some reason, Bradley went a little bit wide on the part of the track where we saw all the crashes and then his race was ruined. Nevertheless, he was very brave and motivated in bringing the bike back home as well as finishing the Grand Prix. This is especially admirable because the gear lever was completely broken so we have no idea how he managed to change gears! However, it’s a big pity for him to not take any points, but we know that he’s fast and he did a lot of hard testing here so I think that we will be in a much better position in Jerez. Now, we go back to Europe for a good rest for the whole team, whom I must say thank you to for their hard work, and next time we will meet in beautiful Jerez.”