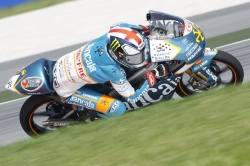 Roasting conditions continued to dominate proceedings on the second day of the Malaysian Grand Prix, with the riders able to comfortably improve yesterday's lap times in this morning's free practice but struggling to do so in the heat of the afternoon. Track temperatures of 52ºC made grip levels critical for qualifying and there was little to choose between the top seven riders, who are separated by just 1.3 seconds. Five of those seven are Spaniards and no doubt they will all be battling to extend the countries record-breaking run of 23 consecutive wins.

Bancaja Aspar rider Bradley Smith escaped from a crash this morning, when he lost the front in turn fifteen, but recovered well in the afternoon to dominate the session. He made just one pit stop despite the suffocating heat here, suggesting he is more than equipped to cope with the conditions tomorrow. His tenth lap, set behind his team-mate Nico Terol, was almost good enough for pole position until two laps from the end, when he was dislodged by Marc Marquez and forced to settle for second place. Terol, who was second this morning, was third fastest in the afternoon and both riders are confident of challenging for a third straight podium double for the Bancaja Aspar team.

2nd Bradley Smith 2.13.691 (16 laps): "We did a great job as a team today although unfortunately it wasn't quite enough to steal pole from Marc, who also made good use of a slipstream. Anyway, I'm thankful to Nico because he helped me set a great lap. I made the wrong tyre choice at the end of the session - the soft option was just too soft and it gave us a few problems. It doesn't matter because it was just an experiment and we have everything clear for tomorrow. We have found a good set-up and I feel comfortable. I think I have the pace to run at the front. It is obviously going to be a long race but my objective will be to follow Marc. Nineteen laps around here will be long but that is what we train for and I know there's nobody out there fitter than me."