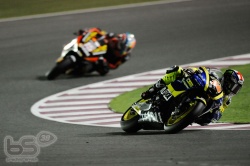 Tech 3 Racing rider Bradley Smith kicked off the 2012 Moto2 World Championship with a battling ride to ninth position after overcoming physical and mechanical problems in an exciting season opener at the Losail International Circuit in Qatar.

A fast start off the line immediately launched Smith into the top 10 from the fourth row of the grid and he commenced a stunning charge towards a group of eight riders dicing it out for the podium in the opening half of the race.

But he was unfortunately unable to sustain his challenge when he suffered a technical problem with the rear brake of his Mistral 610 machine on lap 12, which prevented him from entering corners with the same confidence.

Smith also tired in the closing stages after producing a heroic effort to stay in contention for the top 10 after he was struck down by a bout of food poisoning overnight.

He finished ninth and was only 10 seconds behind the winner and the 21-year-old is optimistic he will be fighting for the top six when the season resumes in Jerez on April 29.

Bradley Smith 9th – 7 points:
“I gave my absolute maximum out there tonight and I am really happy considering the circumstances to finish in ninth. It has been a tough winter while we have worked so hard to improve the Mistral 610 machine, so this top 10 gives me good motivation for the forthcoming races. The Tech 3 Team did a fantastic job and each time I went out on the bike we made a big step. The race was going well and I was having good battle with de Angelis when I lost my rear brake just after halfway. That meant I made a few mistakes and physically I was tired because of the food poisoning. I'm just glad I trained so hard in the winter because I was drained of a lot of energy by the sickness. To be only 10 seconds behind the winner is a decent result because after qualifying it looked like it could be 20. So we found half-a-second for the race and now I am looking to Jerez with a lot of confidence.”

Herve Poncharal – Team Manager:
“Moto2 has always delivered some incredibly exciting racing and I'm glad to see nothing has changed in 2012. I'm very pleased to see Bradley in full attack mode in a race again and he was very aggressive at the beginning. For the first half of the race he was in the leading group and we knew we would have a very good second half of the race because the Mistral 610 is really good on used tyres. But unfortunately Bradley was very sick during the night, so his physical condition was not perfect. He was completely exhausted after the race and I want to thank him for riding such a determined race when he wasn't in peak condition. I think he had to potential to finish in the top six, which is very important to see that we can be really competitive and I'm really looking forward to the next race in Jerez.”