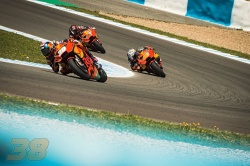 Red Bull KTM Factory Racing completed a demanding week at the Circuito de Jerez with a productive test session on Monday and Tuesday directly after the Gran Premio Red Bull de España where the KTM RC16 posted its first top ten finish of the 2018 MotoGP season.

In warm and pleasant conditions in the wake of the fourth round of nineteen in Southern Spain, the test crew helmed by Mika Kallio were joined by Grand Prix riders Bradley Smith and Pol Espargaro as the trio completed yet more laps around the short and narrow layout.

Both Smith and Espargaro tried the updated version of the KTM RC16 that Kallio used to claim tenth position in the 25-lap race on Sunday. The Fin continued his work on evolving the future incarnation of the MotoGP machine as well as assisting the Grand Prix squad with a view towards the Grand Prix de France at Le Mans on May 19-20.


Bradley Smith (Factory Rider MotoGP):
“We made some definite progress during the GP in a few areas and that helped towards the better result. The test was then about trying to build on that and my weaker areas. We worked through a lot of different parts like chassis and swingingarm to the new development bike for the future and to give some input on suspension and ideas to help gain an advantage. We have a good understanding of our situation after riding three bikes. We have everything very clear and that we are not missing anything – even if that means mixing some of the three. I go to Le Mans happy with our progress. It is a track with some very hard braking points and in cold conditions it is important to warm-up the tyre. We’ve been working a bit on that today. We finish our work here happy and in better shape for the French GP.”


Sebastian Risse (Technical Director):
“A lot of things piled-up – a lot of parts and ideas – that we could not go through the overseas races and even some things left over from pre-season tests. We also had some doubts and decisions to make so this test was important. We had good conditions and we’re very pleased with the results. Not only was the pace good but we made a step forward in many areas and now we need to prove that on other racetracks and in other circumstances. We discovered some answers that we didn't find on the race weekend at Jerez, so it was already quite positive in this aspect. We are also happy regarding some longer-term ideas that we confirmed with the GP riders. Now we are looking forward to the next race.”