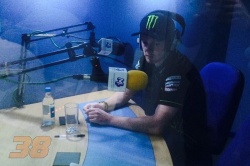 He also undertook various media requirements for some of his personal sponsors in the build-up to the Hertz British Grand Prix 2014 at Silverstone this weekend.

In addition he has been subject to various radio interviews, some of which have been transmitted live with others pre-recorded to be aired later in the week. Detals of these interview can be found below: