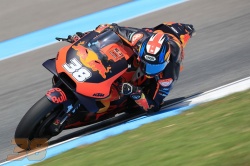 
Red Bull KTM Factory Racing Team defied the stifling heat of the Chang International Circuit at Buriram to complete the Grand Prix of Thailand – MotoGP’s first visit to the country – with Bradley Smith scoring 15th position with his KTM RC16.

The fourteenth round of nineteen in 2018 MotoGP dropped into Thailand and opened the first of four events that will take place in the month of October, also visiting Japan, Australia and Malaysia. The flat and twisty Chang International Circuit was a layout that the series had visited just once before. The pre-season test took place in markedly cooler conditions compared to the sizzling climate that many eager race fans braved to see Grand Prix’s finest.

The 26 lap race rounded the 4.6km trajectory, distinctive for its three vast straights connecting the first, second and third corners before the course starts to wind on itself. Tyre choice was critical for resisting the duration of the sprint at full race speed.

Setting off from 15th position Bradley Smith made his customary bright start and sat on the fringes of the top ten. He circulated with Aleix Espargaro and Franco Morbidelli for company until he faced stiff opposition from Scott Redding in the last few laps. The Brit eventually managed to hold off his countryman to gather 15th position – just over twenty seconds from the stunning race climax between Marc Marquez, Andrea Dovizioso and Maverick Viñales – and capture MotoGP points for the seventh time this season.


Bradley Smith (Factory Rider MotoGP):
“It was a bit like Aragon where we had good one lap pace with the soft tyres but in the race with the Hard option we are struggling a little bit more. Again I had a good start and reached P10 in the beginning. I learned from being around the other guys and we seem to be having the same problems. It will be good to make some more analysis this week and before we go to Japan. I think we will be able to find some conclusions and answers. I had a fun little battle with Scott (Redding) in the final laps and it was strange to be fighting so hard for the last point but that’s how competitive it is inside MotoGP at the moment; it is not easy to get that point. Japan next and we know it is a hard braking track and we have a lot of acceleration so we need to set up the bike in the right way. It’s a track I like with high-grip so I hope we might be able to use some of the softer compounds there.”


Mike Leitner (Team Manager MotoGP):
“We missed Pol here during the two day test in the spring and this was not great for our development: we felt that this weekend. Bradley had some acceptable sessions in practice and had a good race: 23 seconds behind the winner is not a disaster but of course everybody wants more. For Pol he was good in the morning with the lap-time but we knew it would be hard for him to ‘survive’ for long in these hot conditions and he did well for three-quarters before he couldn't push anymore. I think he has to look forward to Japan and hopefully we will have two fit riders there where we can work towards a better result.”