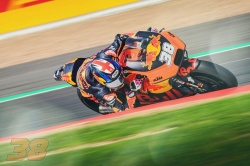 Bradley Smith enjoyed his most effective qualification session in Red Bull KTM colours and will sit in the middle of the third row of the grid for his home Grand Prix at Silverstone tomorrow while Loris Baz, a late replacement for the still injured Pol Espargaro, rode to 18th in his second day of action with the KTM RC16.

Round twelve of 2018 MotoGP landed into the historic and fast curves of Silverstone for the British Grand Prix and was greeted with a typically unstable climate over the weekend. Breezy conditions meant sunshine but also brief heavy showers and some very cool temperatures. There was more adversity with the new track surface proving to be bumpy and challenging through one of the longest and fastest laps on the Grand Prix calendar.

Bradley Smith, invigorated by the prospect of home turf and local support, pushed through the Free Practice sessions and reached 10th in FP3 this morning. He negotiated Q1 brilliantly, setting the fastest time at his first attempt and then again in his second run to head Alex Rins by 0.3 of a second and headed into Q2. Substantial delays due to Tito Rabat’s injury and persistent showers created mixed conditions and caused a tense time in pitlane. Smith eventually made his bid for Pole in the first throes of the 15 minute session. With a 2min 11.514 effort he stayed in the running for the front rows of the grid and notched his personal best classification with 8th; just 1.3 seconds away from the eventual Pole Position by Jorge Lorenzo.

Red Bull KTM were able to count on the talent, experience and enthusiasm of former MotoGP racer and current WorldSBK campaigner Loris Baz as a fill-in for Pol Espargaro, who is still recovering from his crash at Brno and a collarbone break. Despite the late call-up Baz relished his opportunity to put the factory KTM RC16 through its paces. The Frenchman was 5th fastest in Q1 on Saturday and will be 18th on the grid: the sixth row.


Bradley Smith (Factory Rider MotoGP):
“No messing around today. In qualifying I just had a feeling. I was out on the mediums, I knew most of the track was dry and just had to check out the three corners at the back of the circuit, once I realised they had pretty good grip I decided to get on with it. I went to take the best out of the tyre but we got a second lap out of it, which was positive. The issue then was that I had to go into Q2 with no tyres left, just used ones, and had to let it cool down as much as I could. To only be 1.3 away then we’ll take that and it’s been a good day and certainly makes tomorrow a lot easier. The guys are looking at the data today to work out where we can make it work a little better if there is rain.”


Sebastian Risse (Technical Director MotoGP):
“This has not been such a technical weekend at the moment. It has been more about extreme conditions and Bradley took advantage of that with full commitment in terms of decisions about when to go out and with tyres and it really paid off. We are really happy for him and as a team, but we also have to say that we did not improve the bike; this (classification) was down to the rider. With Loris it is also a special situation and he still needs to get used to the bike and encountered the difficulty of jumping on it to qualify in the wet having never tried it before! He did great. He was initially following Bradley and I think this gave him some confidence to understand how the bike worked. He kept improving, also in the dry. We worked with both riders to get the best out of the conditions and tomorrow could be tough. Today was good preparation for that and now we are really looking forward to the race.”


The British Grand Prix races get underway tomorrow with the threat of rainfall from the middle of the afternoon and the distinct possibility of a wet programme ahead. For this reason the timetable has been adjusted so that MotoGP will be the first race of the day at 11.30 GMT.