Bradley finishes on a high with 8th position 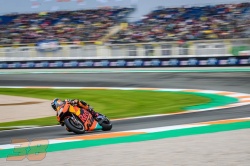 The climate presented difficulties across the weekend with continual showers and thunderstorms ensuring all sessions - aside from a respite for Qualification on Saturday afternoon - were wet and slick.

Red Bull KTM reached several milestones at a soaking Grand Prix of Valencia as Pol Espargaro rode fantastically in a restarted MotoGP race to finish 3rd and secure the factory’s first ever podium in the premier class. Red Bull KTM also bode farewell to Bradley Smith in what was his final outing for the team since being the first rider to join the MotoGP project early in 2016.

Smith had to plough through from the last row after a technical issue restricted his potential in Q1 on Saturday. The Brit was typically astute and reached 6th place in the rain until an untimely crash at Turn 13. Smith’s determination not to end his KTM stint with a ‘DNF’ meant he pushed his racebike back to the pitlane and was lucky to arrive back within the five-minute window of the red flag being shown. He was able to restart in 16th on his second machine and then arrived to 8th: his highest classification after two years of hard work and perseverance with the RC16.

Bradley Smith (Factory Rider MotoGP):
“Some things are just meant to be. I was pushing back to get to bike No.2 just to finish the race because there was only fifteen guys at that point. I did not want to ‘go out’ like that, with a crash and thinking ‘what could have been’: that's not what I’m about. I was running inside the top ten and my ambition this weekend was to get six points so I might be able to beat Pol in the championship. I got eight but he did a fantastic job today. It was obviously great to see and great for the team and all the boys. I’m happy I go out on my ‘high’ this was my best result. I cannot ask for much more.”


Mike Leitner (Team Manager):
“For the whole KTM group and Red Bull this was a fantastic day. We knew a result like this would be possible because we were ‘there’ in dry and wet conditions, especially with Pol but Bradley was there as well. To finish the season with a podium and eighth position for Bradley is very nice. It is great that he leaves in that way and we wish him all the best with his future. I don't think we expected this podium but it was super-crazy and for Pol to recover from a crash, come in and focus again and perform again to make the podium is a wonderful story that I don't think anybody would have believed this morning!”