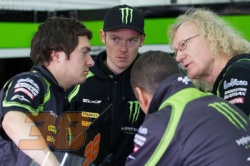 Bradley Smith returns to the Sepang track in Malaysia fired-up for the second MotoGP™ test of the season which starts on Tuesday. The 22 year old Oxfordshire rider had a very impressive first full MotoGP test at the 3.447 miles circuit on the outskirts of Kuala Lumpur at the beginning of the month.

In three days of testing in hot humid conditions he finished a very impressive eighth fastest and was less than half a second slower than nine times World Champion Valentino Rossi. He returns on the 250 bhp Monster Tech 3 Yamaha with still a great deal to learn about riding the fast, complex machine on the Bridgestone tyres before that opening grand prix of the season in Qatar on April 7.

The Oxfordshire rider has stayed out in Malaysia between the tests and has kept fit with motocross, supermoto and cycle training in the heat. There will be one more test at Jerez in Spain after the three days in Sepang before that first race of the 18 round season.

Bradley Smith:
“Now the hard work starts to close the gap on those top riders even more. Of course I was pleased with that first test and thought it was a decent start by a rookie but I suppose I’ll show if I deserve the ride when I start mixing it with the likes of Stefan Bradl and Alvaro Bautista. I’m having to re-learn how to ride a bike that is so incredibly fast. I feel I’m riding ten out of ten but I’m around the seven mark. I need to forget so much I learnt riding a Moto2 bike and trust the Yamaha and the Bridgestone tyres. Also the carbon brakes mean you brake so much later from a much higher speed. I can’t wait to get back out there and work with the Tech 3 team who were fantastic at the first test. I’ve kept very fit and really enjoyed the motocross, supermoto and cycling. Hopefully that hard work will pay off on Tuesday and for the next two days. Let’s hope the rain stays away and I can make the next big step in my MotoGP education.”