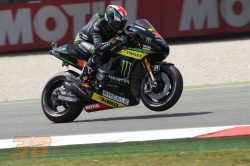 Bradley Smith will commence the 8th round of the 2015 MotoGP World Championship from 12th on the grid at the legendary Assen circuit. Smith delivered a notable performance in FP3 to seize 5th position with a 1’33.387 lap that was just 0.220 from the leading time. He surged into action when qualifying 2 began and posted a best time of 1’33.236 which saw him at the rear of the fourth row. Nevertheless, his time was just over two tenths back from his teammate in what was a fiercely competitive qualifying shootout.

The British star will now look to undertake a typical rocket start from the grid and then battle for the leading satellite honours in the Motul TT Assen in order to follow up his double top five finishes at the previous two rounds.

Bradley Smith: – Position : 12th – Time: 1'33.236 – Laps: 8
"I’m quite content with how the bike is feeling for the race tomorrow, so despite being a bit frustrated that I was only 0.2 from fifth, I am still optimistic. We tried a few different settings in FP4 which seem to be positive for the race and have definitely given us a good direction. Due to this, we were weighing up our options before QP2 and considered altering the settings for qualifying, but in the end we decided to remain with what we had. Perhaps we should have risked changing something, but then again, doing that is a gamble and it doesn’t guarantee anything. Nevertheless, I know that I left more than 0.2 on the track and our race pace is more competitive than our position is showing at the moment. I have made things a bit trickier for myself by starting from 12th, but with a strong start, we will be in the mix. Just by looking at the lap times today, we know the race will be very close, plus the track is narrow and so it will be a bit more difficult than usual to find somewhere to pass. Yet, the bike is good and I am looking forward to the 26 lap battle tomorrow."