Bradley misses out on claiming 10th spot by the narrowest margins 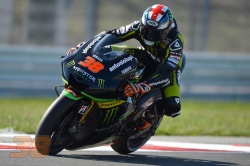 Rookie Bradley Smith missed out on claiming 10th spot by the narrowest margins at the end of a 28-lap race that was played out in front of a crowd of 50,949 fans.

Smith was less than 0.2s away from continuing his outstanding run of top 10 finishes in his rookie premier class campaign. Locked in a fight for long periods with Andrea Dovizioso, Nicky Hayden and Michele Pirro, Smith almost overhauled the latter with a tremendous last lap attack.

Smith set his best lap of the race on the final lap but just couldn’t find a way to make a clean pass on Pirro and he had to settle for 11th. The consolation though was the 22-year-old moved back into 10th place in the World Championship standings having joined Aleix Espargaro on 71-points.

Bradley Smith 11th – 71 points:
“The race pretty much panned out as I’d anticipated and I thought I’d stay close and race the Ducatis. I got an amazing start and that gave me a great opportunity to be in a battle but I just didn’t have the pace throughout. I wasn’t as fast as I’d hoped and again it was difficult at the start of the race on a full fuel load. But we have learned a lot all weekend and particularly in the race and now I am looking forward to tomorrow’s test where we can try a few things to improve our package. Our setting right now is pretty good but I can improve my riding position. I don’t think we are far away but small details can make a big difference when it comes to the race.”

Herve Poncharal – Team Manager:
“We knew this weekend would be tough after such a difficult experience for both Cal and Bradley in Silverstone. Bradley had a tough weekend, we knew Ducati would be strong here like always because they test on this track frequently and Bradley did a very good job. He set his fastest lap on the last lap and that shows there is still room for improvement but the whole team has demonstrated a lot of fighting spirit this weekend and I am proud of everybody involved. Finally I must pass on my congratulations to Jorge and Yamaha. Jorge was exceptional and he showed that this World Championship is not over yet. And I am also delighted to see the new YZR-M1 seamless shift gearbox make a winning debut, which bodes well for the future.”