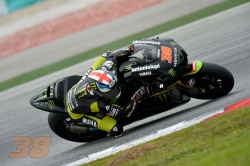 Bradley Smith has been reflecting on his very encouraging first test of the 2013 MotoGP™ season. Riding the Monster Tech 3 Yamaha on which he will compete in the 18 round MotoGP World Championship, the 22 year old completed nearly 150 laps of the three and a half mile Sepang circuit in Malaysia in three days of extensive testing.

It was the first time the three times 125 cc grand prix winner had ridden with the likes of World Champions Jorge Lorenzo, Valentino Rossi and Dani Pedrosa and he came out with flying colours.

He was eighth fastest overall after three days and on the final day was also eighth fastest after a race simulation test in the humid conditions before the afternoon rain arrived. It was an amazing performance by the Oxfordshire rider which has given him enormous confidence before the next test at Sepang at the end of the month and that first grand prix of his rookie MotoGP season in Qatar on April 7.

“I’ve had a good sleep to digest all the information I’ve taken on and already I can’t wait to get back on the bike here at the end of the month,” he explained this morning. “I am really happy with the way this test has gone and my lap times and final position has already given me a lot of confidence. I didn't come here with any expectations but to be eighth is where this bike needs to be. I am still not getting all of the potential out of the YZR-M1 but I am gaining in confidence with every lap I complete and it has been mission accomplished in terms of coming here and understanding how the bike needs to be ridden. I still need to be a lot smoother but I am happy to be within two seconds of the fastest time. I knew that was possible but the hard work starts now to close that gap even more. The race simulation was amazing to build up my experience but it was seriously hard work. It was the hottest day and it is very physically and mental ly demanding to ride a MotoGP bike at that pace over a long distance. It is hard to concentrate but the best thing was on the last lap I did a 2.02.9 and my best lap was a 2.02.5. So I was consistent and while I need to be faster, I'm really happy to be leaving this test having learned so much."

Bradley’s second three day test of the season starts on February 26 at Sepang.