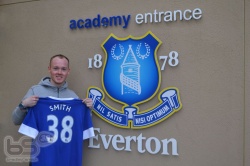 Bradley Smith  sampled life in the English Premier Football League when he was invited to a special training session with Everton FC yesterday (Thursday). The 22 year old new MotoGP star came through a strenurous 40 minute Premier League match fitness test with flying colours and was declared as fit as a first team player.

Oxford – based Smith, was invited to Everton’s Finch Farm training ground in Liverpool by Assistant Manager Steve Round, through Optimum Procurement one of his personal sponsors.

He watched the training session of the Everton first team who currently lie an impressive fifth in the Premier League. He was then given a tour of the facilities before being put through his paces by the Sports Science team.

“It was a great honour to be given this opportunity to experience a structured programme and to talk and work with some of the countries most elite sports scientists,” explained Smith, who makes his MotoGP debut with the Monster Tech 3 Yamaha team in Qatar on April 7. “They presented me with a special first team shirt with number 38 on the back but I don’t think I’ll be getting a call from Manager, David Moyes, to be in their line-up when they play at Southampton on Monday night. However, I’ll be watching the game on the television with great interest especially after an insight into how hard those guys train.”

It was back to training in the Oxfordshire snow for Smith on Friday in preparation for the first vital MotoGP test of the season at Sepang in Malaysia on February 5.