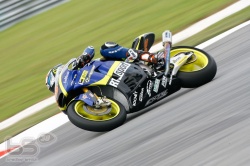 Bradley Smith was unable to mark his final appearance on the Mistral 610 with a top 15 finish after he found it difficult to find a comfortable feeling on the damp surface.

The British rider, who will join the Monster Yamaha Tech 3 MotoGP Team in 2013, showed his battling qualities to remain in the hunt for 11th until the final stages. He eventually crossed the line in 16th position.

Bradley Smith 16th – 109 points:
“Today wasn't the way I wanted to finish my time with the Tech 3 Racing Team in Moto2.  It was a difficult race and I didn't have a good feeling throughout. I want to take this opportunity to thank Tech 3 Racing and all my crew for everything they have done for me in the last two years. We have had some great times together and I have definitely learned a lot. I know we have made the Mistral 610 more competitive than it was when I joined in 2011, and it was a shame that we couldn't get the results we'd anticipated this season. I'm now really excited to begin my new adventure with the Monster Yamaha Tech 3 Team in MotoGP. It is going to be a big challenge but one I am up for, and I know with the support of Tech 3 and Yamaha I have a great opportunity. Finally I'd just like to wish Danny and Louis a successful 2013 because they are joining a great Team."

Herve Poncharal - Team Manager:
Bradley never really found a confident feeling with the bike all weekend and that's a pity because we were expecting him to be much more competitive. We can now look forward to 2013.