Bradley starts from 16th, after unlucky crash in FP4 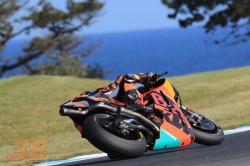 The blustery and changing conditions of Phillip Island and the spectacular course in the south of Australia welcomed the second step of the October ‘triple’ for MotoGP. The natural and curling high-speed track in the state of Victoria was a positive setting for Red Bull KTM Factory Racing Team and was scene to Bradley and Pol’s best results of 2017.

The duo immediately got to work through Free Practices 1, 2 and 3 where they posted lap-times to sit agonisingly close to the top ten and the automatic slots for the Q2 period. Smith was unlucky to crash at the bottom of the difficult Lukey Heights corner in FP4 and had to jump on his second KTM RC16 bike for Q1 where he ended the 15 minute session with 16th on the grid and the first space on the sixth row.


Bradley Smith (Factory Rider MotoGP):
“We had a good FP3 and we tried to make a ‘magic’ bike for FP4 to go outside of our normal window to fix some problems. With the crash it took me a while to get up to speed in qualifying and then in those two last laps it was a gamble. One lap it was windy, the next it wasn't, one lap you were blown off the track into turn one, the next it was fine. I think it was a case of who pushed to the limit and didn't have to deal with the wind’ got the best lap. I didn't see many people doing it consistently. It is a shame to be 16th because it hasn't been our pace all weekend but I think with a good start and our race speed we can bring ourselves back to the top ten.”


Sebastian Risse (Technical Director MotoGP):
“There have been some ups and downs throughout the weekend. We had high expectations because this race was great for us last year, one of the highlights, so we knew the bike fits quite well to the track. Anyway, we worked our way through the sessions and to get the tyres working in all conditions and in a similar way. It meant some big adjustments and was the challenge of the weekend. I think ending up in Q2 was a big relief. Inside qualifying itself we know that you have to manage the Free Practice almost as if it is QP time when it comes to the tyres. Ultimately we did not have the tyres left that we wanted but it was part of the plan. We could not show our full potential in Q2 but it was good to be there. We hope to see a good race tomorrow. We’d like to go forward from our qualifying positions but it depends a lot on the conditions with the wind and temperature. It is hard to predict. We are always heading for the top ten and I think we had hopes of better before the end of the season. It doesn't come naturally and you need a bit of luck. The top ten is already a good result.”