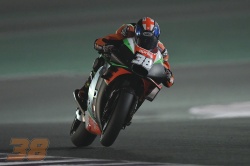 The first round of the season in Qatar ended up being a good weekend for Aprilia Racing Team Gresini, rounding out three days of constant growth with a positive race.

Bradley Smith’s race ended early due a to a harmless crash two laps ahead of the chequered flag. This was the first race for the English rider and the test team, and the weekend produced a large amount of data and results from the many tests completed. This data will be valuable material for the next steps in the growth of the 2019 RS-GP, a bike that demonstrated outstanding potential in the Qatar night.


Bradley Smith:
"It was not the weekend finale that we expected. As we had already figured during the tests, after the first 5 laps in which I felt very good, we inevitably began to lose ground. During the final laps, I tried to pick up the pace a bit, but I crashed on turn 1. We’ll need to analyse this behaviour well. We have some ideas about it already and we’ll start working on it as early as the next tests in Jerez."