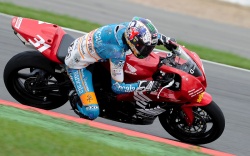 The 2011 Moto2 world championship maybe seven months away, but Bradley Smith has already kicked off preparations for next season.

The 19-year-old was spotted testing a production Honda CBR600RR at the Ron Haslam School at Silverstone earlier this week.

Smith, who is currently fourth in the 125GP standings, has targeted a move to the ultra-competitive Moto2 class next season.

And he’s already getting down to the business of adapting to a 600cc four-stroke, spending time getting tuition of former 500GP star Ron Haslam before he completed a few laps with 2010 World Superbike contender Leon Haslam.

The Moto2 class features Honda-powered 600cc four-stroke engines housed in prototype chassis and has been a big success in 2010 with over 40 entries.

Smith, who has held talks with the Tech 3 and Marc VDS Racing Moto2 squad’s in recent weeks, told MCN: “Being given a few tips by Ron was a great thing and I really enjoyed it, so a big thanks to the him and Leon for letting me come and have a go at the school.

"I was backing it into corners and getting used to having a bike move around a lot underneath me so I feel I’ve already learned a lot.”

Smith, who had only ever completed ten laps on a 600 previously at the Cartagena circuit in Spain last year, added: “When I first rode a 600 I wasn’t overly keen and confident but now I feel I’ve got a lot more understanding of what you need and I enjoyed it.”

There was a serious side to Smith’s test though as he bids to join Scott Redding in Moto2 next season.

He said: “I don’t want to start next season on the back foot so the earlier I can start the preparations the better. I want to go to Moto2 next year and I need to start learning how to ride a 600 and this was the perfect chance without the stopwatch being on me.

"I want to be in the best position possible so that if I do get a ride in Moto2, I’m going to be able to perform from the word go.

"I want to be ready from race one rather than needing time to get into it. But Moto2 is definitely the avenue I’m chasing.”