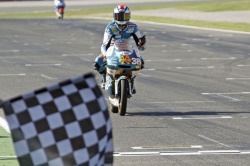 The 125cc race at Valencia on Sunday morning, featured a runaway victory, but one that was different to previous races in 2010. Instead of a Spanish win, it was British rider Bradley Smith who took the glory, ending a run of dominance from the Spanish armada. He set the pace over the course of the race, which had a slow pace of 1'49. Espargaró took second, ahead of Nico Terol.

Bancaja Aspar rider Nico Terol took the runner-up spot in the World Championship in front of his home fans. The Spaniard kept his position of second on the grid when the race started, heading off to chase teammate Bradley Smith down. He rode alone for a few laps, but Márquez and Espargaró latched onto him. Terol did what he had to do, but Márquez' final position clinched him the title. Espargaró added to his woes by sneaking past him in the final stages and relegating him to third. The pódium equalled Álvaro Bautista's rostrum record from 2006, and gave Terol the overall runner-up spot.

Teammate Bradley Smith was the man who gave the Aspar Team their 300th pódium. The Briton started from third on the grid and took the holeshot, never looking back . He led the race as he had in 2009, but the difference this time was that he converted it into a win. His first of the year and a victory that brings an end to a run of Spanish dominance.

1st Bradley Smith: "Obviously this is a very emotional victory for me. I think that this is the best way to say goodbye to the Bancaja Aspar team and to the 125cc class. I had my best bike of the year today and the mechanics did a fabulous job with the Aprilia all weekend. I was lucky enough to open up a gap at the start and pushed with all my might to stop the others from catching me. The last ten laps were hard, a case of keeping concentration and not getting into a fight with Nico, Pol and Marc. I'd like to take this opportunity to say goodbye to the Bancaja Aspar team, who have been my family for the past two years. I can't think of a better way to thank them for all that they have done for me. It is hard to end such a great relationship, but I am convinced that we can be together again in the future."