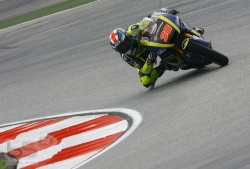 Torrential rain that fell shortly after the earlier Moto3 encounter delayed the start of the 19-lap race by more than 30 minutes, but Smith's wet weather riding skills quickly came to the fore when the action did get underway.

The British rider surged into the lead but he was unab le to maintain the fast pace at the front after encountering rear grip issues in improving conditions.

With two broken toes on his left foot causing him considerable discomfort when changing gear, Smith settled into a fast and consistent rhythm that kept him comfortably inside the top 10 throughout.

Monsoon conditions then engulfed the Sepang International Circuit shortly after the halfway stage, with visibility the main issue as the rain battered the long and technical Malaysia venue.

Rather than take unnecessary risks as conditions deteriorated, Smith adopted a sensible and calm approach to bring his Mistral 610 machine home in eighth to keep himself firmly in the hunt for sixth place in the overall World Championship standings.

Bradley Smith 8th – 104 points:
“The weather conditions worked against us today and it was a little bit disappointing because after a weekend where we were always competitive in the dry it would have been fantastic to have a dry race. I was second in the warm-up and in the dry I was very confident of battling for the top three. I attacked right from the beginning as I really wanted to be in front and it was brilliant to lead a race. It might have only been for a short time but it is still a big boost for me and the Tech 3 Racing Team. But I felt from the first lap that we were struggling a bit with rear grip, so I just concentrated on being as fast and smooth as I possibly could without taking too many chances. My left foot wasn't too bad once the adrenaline kicked in and to be honest I hardly noticed it, but the last thing I needed was a crash. I was in a consistent rhythm when the track was drying but then it started raining again and I was just taking calculated risks and not pushing too hard. Eighth is a decent result and good for the Championship and hopefully we can be strong again in Phillip Island.”

Herve Poncharal – Team Manager:
“Once again the Moto2 race provided some incredibly exciting action and it was fantastic to see the local wild card putting in such a strong performance. After Khairuddin's brilliant ride in the Moto3 race, I think the Malaysian fans were in dreamland  and it is great to see motorcycle racing being well supported here. We had a great start when Bradley attacked from the off and took the lead and after a difficult weekend he kept his composure in very tricky conditions to get a well deserved eighth. We could see with the number of crashes how easy it was to mistake, but Bradley got the balance just right between pushing hard and being aggressive and not taking so many risks. The last thing he needed was to crash and hurt his foot again and his result keeps him right in the fight for sixth in the Championship.”