Bright start under the floodlights in Qatar for Smith 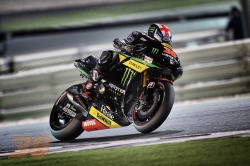 Bradley Smith commenced his 2015 MotoGP campaign with an assertive ride to seize 8th at the Losail International Circuit under the floodlights. The young British rider began the race from the head of the third row in 7th and leapt forward as the lights went out to complete the first lap in 5th.

Smith remained focused and set into his strong race pace and by the 4th lap, he was running in 7th place. The 23 year old rode consistently over the following laps and was in 8th position with eight laps left to run. This was whilst being locked in a fierce battle to be the top satellite rider as well as 7th place with three other MotoGP competitors.

After being pushed back to 9th on lap 15, he burst past Hernandez to reclaim 8th shortly afterwards, before crossing the line only marginally behind Crutchlow who was half a second ahead. The encouraging finish sees the British rider open his 2015 account with a positive result and leaves him optimistic of obtaining another top finish at the next round in Texas.

Bradley Smith: - Position: 8th - Championship: 8th - Points: 8
"I must admit that despite the good result, I am slightly disappointed as we were so close to being the top satellite bike at Qatar. This is our ambition for the year, so to miss this opportunity is a bit annoying. However, to finish only half a second back from Cal isn’t bad at all, especially at this early stage of the season. I had a good feeling with the bike during the whole race and we kept a consistent pace. Yet, I wasn’t really able to race how I wanted to and I had to remain riding in a smooth style throughout the whole distance. This was a bit difficult when battling with the Honda or Ducati’s because those bikes require different riding styles, which need the rider to be a bit more aggressive. Nevertheless to finish 8th and collect some valuable points as well as some useful experience and being so close to our objective of the top satellite bike is not a disappointment. In addition, we will improve and learn from Jorge and Valentino in order to be closer to the front at Austin."

Hervé Poncharal - Team Manager:
"What a race and a brilliant way to start the 2015 World championship! Qatar always produces some incredible racing at the start of the year, but this one was very special for sure. It also seems to be a track that suits Valentino very well and the battle for the front was a really exciting one for everybody to watch. Coming back to the Monster Yamaha Tech3 Team, we have started the championship well and there are many positives to consider when reviewing the weekend. We were only 0.5 of a second back from the first satellite bike and finishing in 8th and 9th is a strong finish which aids us in clinching 4th in the team championship. In addition, being only twelve seconds from the winner is a lot better than at some moments last year. Clearly we have improved and are closer to the front but now both riders need to be sharper with overtaking. We always knew that the top ten is a good target for this year as there are so many fast riders on track, so now we have to carry on in this positive groove at the next races. We are happy and confident after the first round and also after the tough winter testing, which certainly paid off, so we will see you all in Texas for hopefully an even better result."