Determined Tech3 power on, in day 2 at Qatar 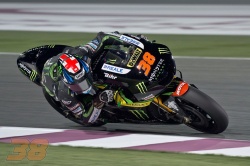 ​Monster Yamaha Tech3 team rider Bradley Smith pushed on and continued his preseason work in the penultimate day of testing in Qatar. Bradley carried on refining his Yamaha YZR-M1 MotoGP bike in preparation for the all important 2016 season opener, where he aims to battle for the leading satellite position.

Smith wisely decided to preserve his tyres for the final session, where he will attack at full speed. His time of 1’56.517 from yesterday leaves him in 14th in the combined standings and tomorrow he aims to close his preseason campaign strongly.

Bradley Smith: – 14th –1’56.517 –52 laps
“It goes without saying that today has been a little bit frustrating. We found ourselves in a position where we don’t have a lot of tyres available to us that work with my riding style and my bike. At the start of the session, we began with used tyres from yesterday just to see their character after having been heated up twice and I have to admit that I felt quite comfortable, but this was our first run. Later on the second stint, I wanted to try some new tyres so we put a slightly harder compound on with a new rear. In all honesty, I found it really tricky to ride close to a solid lap time. So, after pitting and assessing the situation as well as listening to other riders’ feedback, I decided that the best thing to do was to save our good tyres for tomorrow and put our efforts in then. The plan is to do around 60 laps and we’ll have to focus all of our energy into getting the maximum from the final session. Anyway, the general feeling that I had with the bike in the first run was positive, so we’re not far away from where we want to be. After some work tomorrow and hopefully a race simulation, we’ll be ready for the first GP of the year.”