Disappointing end to a positive weekend 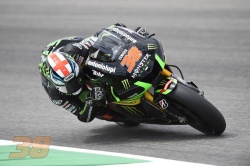 Bradley Smith’s weekend full of promise ended prematurely with an unfortunate crash during the second lap of the Gran Premio d’Italia TIM Grand Prix at Mugello. Having made strides forward during the qualifying and free practice sessions with the Yamaha YZR-M1 that he is increasingly confident with, Smith pulled off a positive qualifying performance of 7th.

He was in prime contention to confidently battle for the top five and upwards. After starting the Grand Prix and ending the first lap in 9th Smith’s luck ran out and he fell, drawing a disappointing end to an otherwise highly positive weekend. The 23 year old will head to Catalunya next week where he will intend to amend his lack of fortune at Mugello with a high scoring finish.

Bradley Smith: - Race: DNF - Championship: 10th - Points: 34
"I would love to have something more to say, but I think it was just a case of having the wrong tyre. I was using the hard compound in the front that we had previously ran in FP3 and which made me crash after doing a mistake at the last corner. Therefore, the initial feedback was not that great and I much preferred the soft option but as the track conditions were quite hot today we were recommended the use to the hard tyre like everyone else, so we followed the suggestion. Unfortunately though I’m not used to that tyre on this track and also, I felt like it didn’t work with my riding style. The front tucked at the Arrabbiata 1 which was turn 8 but in all honesty there wasn’t much I could do about it. It’s very frustrating as I had the race pace to get a really good result but from the first lap I could feel that things weren't going to plan. Now we will wait for Barcelona where I am confident that everything will improve.”

Hervé Poncharal - Team Manager:
"What a race, it was by far the best race of the year. The fighting between Marquez and Lorenzo was incredible and we finally saw Jorge back to his best. It was a big shame with what happened to Bradley as in terms of lap times he was really close to the top 5 and could have easily scored at least another top 8 here in Mugello. I think he was a bit more nervous than usual and hopefully this is not a turning point. He just needs to keep his head down, remain focused and finish races. Luckily the next opportunity to do so is coming soon in Catalunya which is normally a track that suits Yamahas so I’m sure our riders will be once again able to put on a good show."