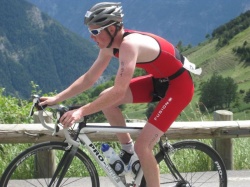 No lie in before the next grand prix at Brno in the Czech Republic for Bradley. He will be up at dawn on Sunday morning to take on Formula One World Champion Jenson Button in the Challenger World London Triathlon.

It’s a 7.00 am start for both Bradley and Jenson at the London ExCel Centre for a long hard morning of swimming cycling and running and if that’s not enough Bradley will then race down to Brands Hatch to watch Dakota Mamola and Taylor Mackenzie ride for his KRP team in the 125 cc race at the British Superbike Championship round.

“I’m really looking forward to the London Triathlon again and especially taking on Jenson once again,” explained Bradley.” He just beat me last year and so I’m out for revenge and have been training hard. Just a couple of weeks ago I competed in the Alpe D’Huex in the French Alps, I’m in good shape and so I’m ready to have a real go. Hopefully I’ll have enough energy to race down to Brands to support Dakota and Taylor in the 125 cc race. After that it’s full on concentration for Brno.”