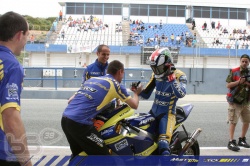 Making only his second start in the ultra-competitive series, Smith adapted himself superbly to the tricky conditions as the light rain that fell persistently throughout the morning continued for the entire 26-lap race.

Smith made a super fast start from fifth position on the grid and the British rider wasted no time in seizing an opportunity to claim the lead on the first lap. He was quickly passed by Simone Corsi and Thomas Luthi but continued a brilliant early char ge to remain in the top three until lap seven when eventual winner Andrea Iannone came by.

With Luthi and Iannone breaking away at the front, Smith continued to exert intense pressure on Corsi for the final podium place with ten laps remaining before he became engaged in an exciting fight for fourth with Stefan Bradl.

The 20-year-old dropped to fifth on lap 18 but refused to let Qatar Moto2 race winner Bradl pull away and when the German made a mistake on the penultimate lap, Smith was on hand to pounce. He then produced a controlled display of aggressive riding to prevent Bradl fighting back to finish fourth and move into sixth position in the overall rankings.

Bradley Smith 4th – 20 points
“I thought ninth was a great result in Qatar, so fourth just feels fantastic and I want to thank my Tech 3 Racing Team and my crew chief Tom Jojic because the bike was working brilliantly in really difficult conditions. The step we made with the set-up in the wet conditions from the Warm-up was huge and I felt much more confident in the race. In those conditions you need to concentrate so hard that the race feels like a lifetime but I just decided to attack from the start. I was a bit shocked to lead but I felt comfortable because it's not the first time I've been at the front of a Grand Prix. I realised pretty quickly I didn't have the pace to match Luthi and Iannone when they came by but that's down to my inexperience and a bit of confidence to push like they were in the rain. If I could run the race again though I'm sure I could have stayed with Corsi and battl close r for the podium. I just lost my rhythm a little bit at about two-thirds distance after a couple of big moments and I got a bit tense and that doesn't help you ride fast in the rain. It was great to fight with Bradl and once he came by I relaxed a little bit and picked up my pace again. When he made that late mistake I just decided to attack and push as hard as I could and fourth is an amazing result when you consider how tough this class is and how difficult the conditions were. I've still got a lot to learn to be fighting closer for the podium but I'll take this fourth with both hands and look forward to the next race in Estoril with a lot of confidence and optimism.”


Herve Poncharal - Team Manager
“We never like to see a race start in these conditions as we never know what will happen. The conditions are very tricky and anything really can happen. Fortunately Bradley was born in England and he can cope with the rain! His start was awesome. He was aggressive at the right moment, took the lead and was able to be close to the front for a few laps. But importantly he never tried too hard and let the others pass when he thought it was wiser to let them get in front. The second part of the race was very long for my heart. It started to rain more, so it got more difficult as the tyres got more used. I am really pleased with Bradley and his way of learning and his improvements. He is really fast and that shows that the Mistral610 has a good potential, which I hope can be picked up by Mike. It was a tough weekend for Mike and clearly he needs to find some confidence. I have no doubt that he can go fast and I believe in him and I hope that the fact that Bradley is doing so well will help Mike to get his confidence back."