Highest classification of the season for Smith at COTA 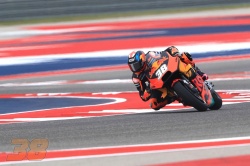 MotoGP moved north across the Americas to arrive at the sweeping and fast undulations of COTA in Austin, Texas and the sixth Grand Prix to take place at the epic facility for what is the third round of nineteen in 2018. On a grey and occasionally damp day of Free Practice and Qualification Bradley Smith worked through some tricky conditions and across a bumpy and demanding track to refine the set-up of the KTM RC16 for the 20 lap distance starting at 21.00 CET tomorrow.

During qualifying the brit logged a 2.05.7 for a decent 15th position and his highest Saturday classification of the season. Not long after the chequered flag had been waved to end the session Espargaro was deemed to have slowed down another rider and docked three spaces, dropping behind Smith and alongside his teammate on the fifth row.


Bradley Smith (Factory Rider MotoGP):
“FP4 went great and the first couple of sectors were good but I did not leave enough space and did not expect to catch (Jack) Miller so easily. I made a couple of mistakes as well but I’m pleased with 15th and we're a team so it was OK for Pol to ‘use’ me a couple of times out there: it is about time that we got into Q2. 15th is my best qualification this year and on race pace in FP4 we looked solid. We just need to keep that up for tomorrow. I think the grip is coming on this race track and this meant we could push forward more.”


Mike Leitner (Team Manager):
“This track is very long, difficult and bumpy so it is very challenging. We were a little lost yesterday but today we made some good moves, especially for Bradley, and we are happy with his 15th because he did a good job. Pol made a massive step and went into Q2 and that is a highlight for us, particularly here. Now we have to focus on giving the guys the best racebike and then they have to manage. It is difficult to talk about decisions already made but as a Team Manager I don't think what happened to Pol was correct; the FIM stewards see it differently. We have to accept the situation and just look to tomorrow.”