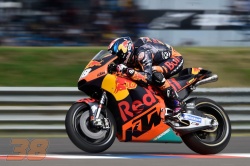 Red Bull KTM MotoGP Factory Racing Team on Sunday celebrated earning their first-ever premier-class points at the Termas de Rio Hondo circuit in Argentina in only their second appearance of their debut season. Pol Espargaro (ESP) finished in 14th place on the KTM RC16 and teammate Bradley Smith (GBR) 15th both of which was an improvement on the opening round in Qatar.

The new KTM factory team was able to take a number of positives away from the weekend in Argentina. Pol Espargaro and Bradley Smith started at 18th and 19th on the grid and they both completed the 25-lap race safely. They also improved on their results in the opening round in Qatar on a circuit that was new for the team and the KTM RC16 MotoGP bike. Both the factory riders and the team manager agreed that while there is still a long way to go in the long development journey, steps had been taken in the right direction.


Bradley Smith (Factory Rider MotoGP):
“Today was a great day for us as a team because we scored our first points with both riders. We made a good step forward from Qatar because there we weren’t able to fight with the group ahead of us. Here we could both stay with Barbera and Tito for most of the race, so we improved by another 3-4 seconds. I was really pleased with my race. All weekend I was struggling to do one minute 41 (lap times) but then in the race they were all mid to low 41s so I was happy with that. Of course we need to continue to improve but right now we have to be happy with what we are doing race-by-race. The next one in Austin (USA) is going to be tough for us. We have no data or information, there are 22 corners and it’s quite a technical layout so it’s going to be difficult.”

Mike Leitner (Team Manager MotoGP):
“Everybody should take all these positive things from what has happened here, and I think the company especially should be motivated because we clearly see that there is a future. If we do the correct things, we will have more interesting races where we can fight with the other manufacturers and riders. This is what was super positive about today because for the first time Pol was directly fighting with other riders. He could see the strong and the weak points of the bike even better and the lap times were acceptable. This was a brand new track for us, and we have to be realistic. A lot of tracks we go to now will be new for us. We can only take the positives with us and try to learn, and to improve. Then next year when we come back to these places we will have already reached another level in our package.”