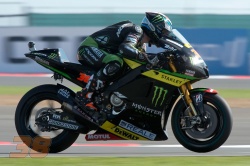 Bradley Smith successfully clinched 6th position in qualifying and will aim to speed to glory in front of his home fans in the 20 lap sprint tomorrow. The 24 year old rider launched into action as soon as the morning practice began and sped to his best time of 2’02.125 on his penultimate lap out of 18, which left him in 6th position.

Later in QP2, Smith who was feeling confident of storming to a strong qualifying position, got straight to work at the 5.9 kilometre track. After undertaking 7 laps, the Briton’s best time was 2’01.140 that he set on his sixth lap, which left him just one tenth of a second behind his teammate. Tomorrow he will intend to undertake a rocket start from the rear of the second row and battle to a top six position in order to consolidate his standing of 5th in the championship.

Bradley Smith: – Position: 6th – Time: 2'01.140 – Laps: 7
“I am pleased with my starting position for tomorrow’s race on the second row and I’m ready to do my best in front of my home fans. We accomplished exactly what we hoped to achieve today as it is crucial to get a good grid position in front of the Ducati MotoGP bikes, especially at a track like this. Those bikes are very fast on the straight, but not as quick as the Yamaha in the corners, so I knew that I needed to produce a good result in order start in front of them. We tried a few things in FP4 for our race setup for tomorrow, but to be honest, we knew that there were some tweaks that we could make to improve my single lap time, but I focused on getting everything sorted for tomorrow instead. Anyway, it’s my third consecutive second row start in part two of the season, which shows our progress is continuing and even though I still need to find a bit more race pace tomorrow morning, I feel good. I hope that the weather remains dry as a lot of English fans are coming out to cheer for me, so I will do my absolute best to not disappoint them by fighting inside the top six or higher.”