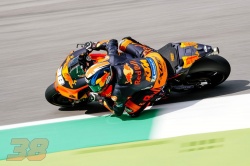 Qualification at a sizzling Mugello circuit in the heart of Tuscany saw Red Bull KTM Factory Racing’s Bradley Smith take 17th position for the Gran Premio D’Italia and for the sixth round of the 2018 MotoGP series.

MotoGP reconvened in one of the most spectacular, scenic and challenging circuits on the Grand Prix trail for the Italian round and the sixth appointment of nineteen in 2018. Mugello shimmered in temperatures touching nearly thirty degrees and the long fast corners were a different type of test for Red Bull KTM Factory Racing for only the second attack for the KTM RC16 around the rapid layout.

Bradley Smith and Pol Espargaro pushed for the fastest lap-times and optimum set-up through the four Free Practice sessions and in a steady climate and weather conditions. Both the Brit and Spaniard started Q1 aiming to improve on their previous efforts set during the weekend and succeeded; marking better chronos compared to 2017 and sit just over a second from the record Pole lap set by Valentino Rossi.


Bradley Smith (Factory Rider MotoGP):
“We are already a good bit faster than last year and this is what we have to base ourselves on and how we have improved and we are definitely getting closer. This track is really technical and this is one of the reasons I love it but the weaknesses show and that's why we are struggling a little bit. I got held up a bit in the last sector of the qualifying lap and it would have been nice to be fifth-sixth with Pol. The fact that we are starting tomorrow ahead of our normal fighting group is good for us. Normally we get good starts with the KTM so we should be able to launch forward. Then it will be a case of who is managing the tyres a bit better and who has the grip.”


Sebastian Risse (Technical Director MotoGP):
“Overall a big thank you and fairplay to the riders; they did a great job in qualifying. The position doesn’t look brilliant but the lap-times were quite good compared to where we were coming from a year ago and compared to the gap to the top so we cannot complain. For sure we want to be better and it isn’t our target to be P15, it’s the top ten, but this is the reality and on this track and because of these chicanes our turning issues are exaggerated and you carry the consequence over the whole next straight and this hurts. We try to get the maximum out of this package – and there is maybe not so much room to improve with what we have here today – but we have a lot going on in the background and I hope soon we can improve in these areas. Tomorrow and the full race distance could be a different story and when it comes to the front tyre.”