MX Addict: Bradley Smith on why the dirt moves him 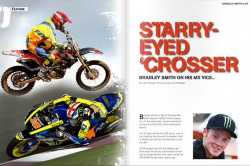 Bradley Smith is Tech3 Yamaha MotoGP bound in 2013, which places him in the extreamly narrow bracket of being one of the UK's elite motorcycle racers.

The 21 year old former 125cc ace is now in the midst of the Grand Prix bedlam that is Moto2 but admits his first love is the dirt.

On-Track Off-Road caught up with the Oxford resident when the Ricky Carmichael Universiry hit Great Britain and here's what the CRF240R rider had to say.......

"I'm not 'supposed' to be but I'm still a motocrosser through-and-through. I try and ride once - and if Im lucky - twice a week at my own track, although it's not like the sand we have to deal with today (at FactCat in Doncaster for the RCU). I'm carrying two bikes in the van so you can see that I'm pretty keen! I just keep it quiet and try not to shout about it to much."