Ninth place finish in front of a record attendance at Silverstone 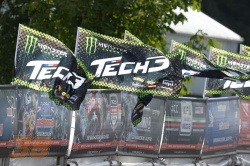 Smith demonstrated his battling qualities in the 20-lap race to secure ninth position, which was his eighth top 10 finish in 12 appearances on Yamaha’s YZR-M1 machine.

Almost 74,000 British fans were cheering when Crutchlow kick off the race in a decent way from the front row of the grid.

Smith kept his challenge for a top 10 position in the overall World Championship standings on course after he was narrowly beaten to eighth place in the closing stages.

The 22-year-old attacked from the off and brilliantly kept Nicky Hayden and Andrea Dovizioso at bay until four laps from the end. Relegated to ninth, Smith mounted a relentless pursuit of American Hayden in the final stages but he couldn’t find a way through and the chequered flag saw him less than 0.2s behind the 2006 MotoGP World Champion.

Bradley Smith 9th – 66 points:
“I was very pleased with my start and we decided to race with the softer rear tyre option, as we were lacking a bit of grip during the whole weekend. I wanted the sun to come out but unfortunately the temperatures remained cold and after just three laps we already knew that the race would be difficult one. Probably the hard tyre would have been the right choice but we did not have enough time to evaluate it yesterday. We did what we could and even if I didn’t want to finish behind Nicky, I decided it was safer the finish the race after Andrea crashed out just in front of me. All in all it has been a tough weekend but riding in front of nearly 75.000 British here today has been an incredible feeling.”

Herve Poncharal – Team Manager:
“I would like to say I’m happy it’s over because it has been a really tough weekend for the Monster Yamaha Tech 3 Team. This is a special weekend for both Cal and Bradley and the motivation to do well is maybe sometimes a bit too big. Bradley also had a strong weekend. Again for nearly the whole race he was battling with Andrea and Nicky and he managed to stay in front of them for many laps, which is not an easy task considering how experienced they are. I’m happy both of them finished their home race and we can prepare for the next challenge in Misano after a very tough period in the Championship.”