Optimism high for Tech3 despite returning rain at Phillip Island 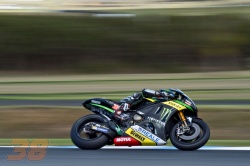 ​Monster Yamaha Tech3 Team rider Bradley Smith leapt back on his Yamaha YZR-M1’s and continued his pre season workout at the second day in Australia despite the weather interfering once again. Eventually, the sun broke through in the afternoon, which allowed the Tech3 rider to get back up to speed whilst setting competitive lap times.

Smith built on his result of 3rd place yesterday and lapped tirelessly as he carried on his preparation work with testing setup options and Michelin tyres. The young Briton clocked his personal best lap time on his final run, which saw him just half a second from the Yamaha Factory rider Valentino Rossi.

Bradley Smith: – Position: 10th – Time: 1'29.992 – Laps: 75
"It was a long and thorough testing programme today, but I feel we did what we had to and we achieved a lot. There were a few things that I wanted to follow up from Sepang and I’m pleased to say that the outcome is positive and they seem to work here. Therefore, heading in that direction with the bike setup will be key for us. We focused on the front end setting as well in order to make the bike more stable in high speed corners. Phillip Island has a lot of fast corners and we tried to find a bit more safety and balance so I could commit further and ride a quicker lap time. Michelin brought two different spec front tyres which the factory guys already tested in Malaysia and I finally assessed these. To be honest, I definitely felt that they allowed me to cut my lap time. Yet unfortunately there aren’t many of those tyres available here, therefore I don’t think there will be many to use tomorrow. Still, it was useful to sample them in order to confirm our direction and we will have more of those tyres in Qatar. It was a shame that some of the track time was cut due to the red flag and the rain in the morning because I was hoping to run a race simulation. These are vital to our testing programme because it allows us to be clear about my feeling with the bike at the end of a GP. Of course, the Yamaha handles differently as the race distance progresses so by testing this factor here, we gain experience and knowledge, which we can use when the season kicks off. However, I’m happy with what we achieved, even though I think 17:45 came around too quickly! Lets see what happens with the weather tomorrow and we’ll continue to try and progress a bit more with the front end setting.”