More improvement for Smith in qualifying at British GP 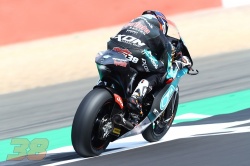 Bradley Smith had a second day of progress at Silverstone for PETRONAS Sprinta Racing, qualifying in 25th for tomorrow’s British Grand Prix. Making his return to the class for the first time since 2012 to deputise for the injured Khairul Idham Pawi, Smith is hoping to be able to make steps forward in tomorrow’s race.

Still re-learning how to extract the maximum from a Moto2 machine after his seven-year absence from the class, Smith made big steps forward in refining the electronics set-up on the bike - something that he believes will aid the team in their future development with KIP. Looking for progress in tomorrow’s race, he’s keen to utilise a strong start as he aims to come home inside the points in his home race tomorrow. Smith will start 28th after a three-place penalty from a previous race.


Bradley Smith:
“The initial feeling today was strong, and I improved over a second in practice. We tried some improvements for qualifying, but we were just unable to find the extra step I was looking for. That made it a little difficult to do a fast lap time, but in any case I’m happy with how things are feeling and I’m starting to understand the Triumph engine a little better. It’s down to the team now to help me improve the bike and we’ve still got a warm-up session tomorrow morning. My practice starts have been fast, so I’ll try and make up some positions in the opening laps and be ready for a good battle.”