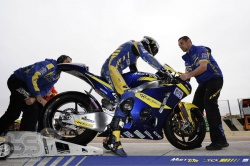 Rapidly changing weather conditions that have dominated the Valencia Grand Prix played a vital role again in this afternoon's Moto2 qualifying session, with Bradley Smith set to start the final race of 2011 from 12th on the grid.

The session started on a dry track but within seconds of the pitlane opening, rain spots started to fall on the tight and twisty Ricardo Tormo Circuit.

Both had completed just seven laps each when the heavy rain started, wetting the track sufficiently to prevent lap times being improved, even though 30 minutes of the session still remained.

British rider Smith was less than 0.2s away from di Meglio and he will start four places further back for the 27-lap race.

The 20-year-old has displayed immense determination and courage to be competing in the final round of the 2011 World Championship. It was only 15 days ago that he broke his left collarbone during practice for the Malaysian Grand Prix in Sepang, but his hard work and dedication to get fit paid off and he set a best time of 1.38.652.

Bradley Smith 12th – 1.38.652 – 7 laps:
"First of all I want to thank my trainer, my physio and also the Clinica Mobile staff for getting me out on track after I injured my shoulder in Sepang. This weekend has not been comfortable, but it is so nice to actually be here participating in the final round. The qualifying session was all about who wanted to take the most risks on a wet track. Considering I'm not at 100 per cent physically, I'm happy with 12th position and it means we have got a decent starting position for tomorrow and now we have to wait and see what will happen with the weather for the race.  My objective is just to see the chequered flag. I have worked so hard to get here and the last thing I want to happen is another crash. We need to sign off this season in a positive way because it has been a fantastic rookie season. I've enjoyed the challenge a lot and being part of the Tech3 Team is fantastic. Once tomorrow's race is out of the way we start preparing for 2012 on Monday and I'm excited about that.”