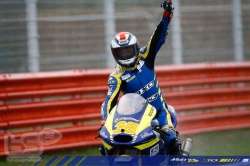 Bradley Smith produced one of the performances of his career in front of his crowd at Silverstone today, the British rider storming from 28th on the grid to claim a stunning second place in a rain-lashed Moto2 race.

Smith was straight into attack mode and with a typically aggressive display he was able to gain 15 places on the opening lap. The 20-year-old needed only three laps to break into the top ten and by the end of the fourth lap he was into the top six as his incredible charge continued in atrocious conditions.

By the end of the fifth lap he had moved by 2010 Silverstone winner Jules Cluzel to claim fifth and on lap eight he passed compatriot Scott Redding to move into the top three. Smith's blistering pace continued and he quickly pulled away from Redding, though he was nearly seven seconds adrift of leader Stefan Bradl at the halfway stage.

He tried to put the German rider under pressure with a series of fast and consistent laps, but unable to close the gap, he ensured he rode smoothly in the final stages to claim his first Moto2 podium.

Today's result moved Smith into seventh in the World Championship standings after six races and he's only 18-points behind second.

Bradley Smith 2nd – 47 points:
“It hasn't sunk in yet to be honest. The rain definitely helped me out today and I doubt I'd have finished second if it was a dry race, so for once I'm not going to complain about the British weather. Starting from 28th I knew I had to make a good start and Rabat went in really hot into the first corner and sat a lot of people up and I was nearly off the track. But going into Turn 3 I went right around the outside of about five people and just kept making moves. In the pack the spray was really bad and I couldn't see anything, so I just got my head down and went for it. I had a really good pace but I had nothing for Stefan. I tried to keep a fast pace and put some pressure on him but he was cool and never really made a mistake that gave me a chance. But to finish second after all the chaos and drama of yesterday, it is something that I never expected when I woke up this morning. To finish on the podium in my home race two years in a row is an amazing feeling. I love Silverstone, so I can't wait to come back here next year already. Looking at the Championship I'm only 18-points behind second position, which is unbelievable considering we've had some bad luck at the start of the year. I want to say thanks to my Tech3 Racing Team because they have done an awesome job and this gives us a lot of confidence for the next few races.”

Hervé Poncharal: Team Manager:
"This was an absolutely fantastic day for the Tech3 Racing Team and big congratulations to Bradley for an unbelievable performance. We had a disaster yesterday with the technical problem that did not help Bradley do more than two laps at the end in qualifying, which meant he had to start from 28th on the grid. Nevertheless he was very confident when I spoke to him, especially in the wet. But it is so difficult to see anything from the back of the field and I don't know how he did it. For me he produced the performance of the weekend and he's just shown what an incredible talent he is. We know we have been fast all season but we a lot of bad luck that meant we never got the results we deserved. This will give Bradley so much more confidence and I'm sure this won't be the last time we see him on the podium in 2011. Once again though all credit to Bradley because I think he put on an amazing show for the British fans.”