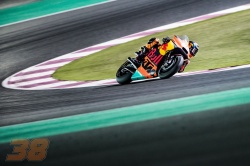 Three days of wind, varying temperatures and more development work with the KTM RC16 at the Losail International Circuit did not blow-in the results Red Bull KTM Factory Racing were expecting for the first round of nineteen in 2018. Bradley Smith rallied to the edge of the points-scoring positions but front tyre fade just ten circulations into the race meant that the Brit had to slow his pace and made it to the finish line in 18th spot.


Bradley Smith (Factory Rider MotoGP):
“I was really happy with the start of the race; I was aggressive and I made up some positions. I was in the mix and inside the points. For the first ten laps everything was working quite well and then I started to struggle with the front tyre and a lot of understeer and this was not something we had in any of the tests. The lap-times slowly dropped off. There were some corners where I was OK and others where I was just losing time. It was frustrating because I put myself in a good position to push along with the front guys. It was good to know more about where the KTM needs to improve by being with the other guys on track.”


Mike Leitner (Team Manager MotoGP):
“Bradley was feeling good in the beginning of the race but when the front tyre dropped he lost the rhythm and this is something that only happened to us tonight. We need to work hard and improve now. We knew this weekend would be tough for us.”


MotoGP moves west across the continents and to South America for the fifth consecutive Grand Prix de la Republica Argentina at the Termas de Rio Hondo circuit after the Easter holidays and in three weeks time.