Red Bull KTM less then a second from pole 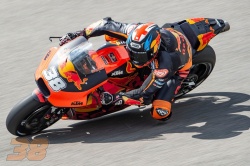 The acute demands of the spiralling German layout presented a different challenge for the Red Bull KTM crew compared to the fast flow of Assen two weeks previously. The team suffered an early blow when Mika Kallio crashed out of FP2 on Friday and injured his right knee.

It was left to Bradley Smith and Pol Espargaro to push the KTM RC16 to the limit around a course with ten left handers and only three right corners and with multiple elevation changes. The pair worked on optimum set-up for what was only KTM’s second ever attempt around the unique trajectory and neared the top ten through the latter Free Practice sessions. QP1 took place in warm summer temperatures and #44’s best lap-time – with a medium tyre choice – meant that he was marginally less than one second away from the pole effort. Smith was just four hundredths of a second slower. Both riders are optimistic for Sunday and their pace for the 30 lap distance.


Bradley Smith (Factory Rider MotoGP):
“Generally not too bad. I think we have better race pace than we do over one lap and that bodes well for tomorrow. Tyre life seems to be quite good for us so the goal is to get a decent start and push to try and be inside the top twelve. Qualifying was a bit frustrating as I was held up a couple of times but the weekend has been positive and consistent. We also managed to improve the bike a little bit in terms of rear grip. It doesn't feel like we are in sixteenth place. It feels like the potential should be higher. We’re optimistic for tomorrow. It will be crucial to make some passes and not get stuck behind people.”


Sebastian Risse (Technical Director MotoGP):
“We’ve been working hard and consistently to make steps with the bike this weekend. With Pol we also tried a few more radical things. Some worked out, some didn't so it was important to also keep the focus on normal setting work and understanding the tyres etc. It was a compromise but when we got to qualifying we brought it all together and again it was very tight. It was not the top ten position that we were looking for but when you see the gaps and the lap-times we have to be happy today. We have done our fastest lap with the race tyre and it seems to be constant. We cannot get better in terms of relation between qualifying and race pace. Let’s see what the others can do…but we are confident that we can have a good race here tomorrow.”