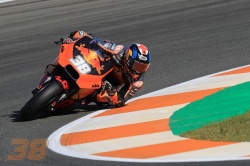 As the Red Bull KTM MotoGP Factory Racing team go forward to the final race of their first season in the premier class, Pol Espargaro qualified through to Q2 once more as the pace of the KTM RC16 continues to shine en route to 11th position this afternoon. However, Espargaro will not be able to start from that well earned place as he has used an extra engine outside his annual allocation.*

Bradley Smith had a good day as he found over a second from yesterday and will thus start seventeenth as his current form flourishes too.

For the fourth time this year there will be three RC16s on the grid as Mika Kallio returns for a wildcard. The Finn, already a winner here on 125cc and 250cc KTMs will start 19th on the grid. Mika will continue to be in KTM colours next year after a new contract was signed in Valencia today. Kallio will also ride as a wildcard in selected Grands Prix during the 2018 season.

The Valencia MotoGP race tomorrow has been a sell out for weeks so with the weather set fair it is sure to be a spectacular finale to a historic season.

*Due to several engine (screamer to big bang changes at Jerez) and chassis updates (Misano and Aragon), Pol Espargaro has had to use a 10th engine this weekend which will mean he will start the final race of the 2017 MotoGP season from the pit lane. In his original allocation of nine engines there are still four with many kilometres remaining on them, but due to the aforementioned chassis updates these engines are physically unable to be installed into the current chassis.


Bradley Smith (Factory Rider MotoGP):
“I feel we made a really good step today as the lap time jump was over a second and then I did a good run on older tyres in FP4 getting faster towards the end of the run. I was a little bit disappointed I didn't nail my qualifying lap as I left maybe 0.1 or 0.2 seconds out there as it would've put me a row further up. A good start tomorrow with good weather after some small refinements and I'm ready to do battle.”


Sebastian Risse (Technical Director MotoGP):
“Well, first of all looking back to us here last year always makes you smile but when we look at our lap times it's a great result for us. Tyre choice will be very interesting for many riders, but for Pol he has a very special race not due to any problem here but due to our development and progress. Now we finish the second half of the season we are so happy we've finished in the top eleven at every race since Brno. We have been on another level since Brno and we're more than happy about it but we've put a lot of effort to stabilise the situation and not make too much of a step and then lose it. It was a question of keep developing but not lose this pace and know what you have already. Now over the winter we want to make another step, but before then we must finish the season.”