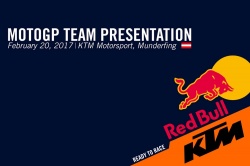 KTM celebrated a very successful start to the 2017 season with an impressive 16th consecutive Dakar Rally victory. Now the company begins a new era on the asphalt with its entry into MotoGP.

The Red Bull KTM Factory Racing Team will present the complete MotoGP lineup for the 2017 season at the new KTM Motorsports Building in Austria immediately following the second MotoGP IRTA Test at Philip Island, in Australia.

There will be further tests afterwards at the Losail Circuit in Doha, Qatar, before the start of the 2017 MotoGP season begins at the same venue on March 26, 2017.