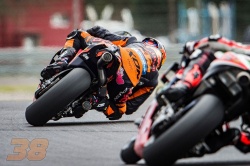 MotoGP gathered for the second round of nineteen at the slick and pacy layout of Termas de Rio Hondo for the Gran Premio de la Republica Argentina.

After a long haul from Europe the majority of the paddock encountered a warm but unstable climate at the circuit over 1000km northwest from Buenos Aires. The KTM duo hovered around the top fifteen in the first Free Practice sessions, and FP3 Saturday morning was a tricky blend of wet and dry conditions with occasional light showers and humidity.

Through FP4 and Q1 #44 and #38 maintained their push for drive and traction to harness all the power of the works KTM RC16. Espargaro encountered a technical hitch in FP4 that forced the Spaniard to use his second racebike for the beginning of Q1 and he couldn't quite grasp the extra tenths of a second to slide into the top bracket as a damp track quickly began to try. Bradley Smith, who was content with his set-up on the RC16, was caught out by the varying track surface.

Qualification saw the Red Bull KTM Factory Racing duo of Pol Espargaro and Bradley Smith classify in 16th and 21st positions respectively meaning slots on the sixth and seventh rows of the grid for the 25 lap dash on Sunday.


Bradley Smith (Factory Rider MotoGP):
“A frustrating day. I felt that we did a very good job in trying to improve the bike and find some grip but I made the wrong call by staying out on the track and I did not expect it to dry as fast as it did. I overheated the tyre and by the time I looked to come in (to the pits) there were four minutes left so I had to suck-it-and-see. We didn't try the soft tyre in practice and it might have worked today. Overall a few small frustrating things but in general I’m feeling happy with the bike and I’m happy, so we’ll see what tomorrow brings. We have some ideas, whether it will be wet or dry, but I think the track will be difficult for everyone.”


Sebastian Risse (Technical Director MotoGP):
“We’ve had some ups-and-downs so far this weekend. In FP1 we were where we expected to be; around a second away from the top. In FP2 the conditions were difficult and maybe we didn't change the bike around enough. FP3 – and today generally – we had to be a bit more radical in how we adapted but the plan disappeared when it started raining and we had to start from zero. We made some good steps on the bike after FP3 and felt we had a good package but everybody has the feeling that in FP4 and Qualifying we did not get everything out of the bike and that package, so from that point of a view we are a bit disappointed. Some technical difficulties also disrupted our rhythm but we were able to react. The result is not a disaster and I think we are stronger than how we look at the moment.”