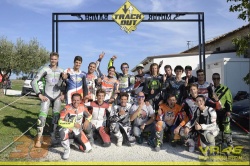 Just a few kilometres from Misano, the scene of Rossi’s superb victory and the uncharacteristic Marquez crash which saw him end up 15th in the race on Sunday, the riders reconvened at Rossi’s MotorRanch dirt track circuit on the outskirts of his home town Tavullia.

The nine-time World Champion regularly rides and trains at the purpose built facility which is also a training ground for the young riders of the VR46 Academy. Bradley is a keen motocross rider in his spare time and he enjoyed the day riding alongside Rossi and their World Championship colleagues.