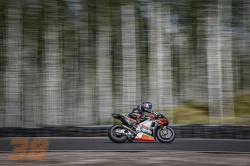 Day 2 of the KymiRing test is now done and dusted for MotoGP™ manufacturers' test teams, with better weather early on Tuesday allowing everyone some dry track time and with it, a new - although unofficial - fastest lap of the venue. That fastest lap was set by Aprilia test rider Bradley Smith, who put in a 1:47.540 to top the timesheets before action was cut a little short as the weather closed back in.

Whilst it stayed dry and sunny earlier in the day, Honda test rider Stefan Bradl bounced back from a crash midway through yesterday to end the test second quickest, 0.324 behind Smith. After using a ‘salad box’ yesterday, Bradl’s RC213V was seen without it for the entirety of Tuesday's track time.

Ducati’s Michele Pirro, meanwhile, had an eventful day on Tuesday but it ended in him finishing the test third quickest. The Italian was the only faller after a crash at Turn 11, rider ok, and Pirro was then later seen testing a larger ‘salad box’ than was spotted yesterday - that's as well as a modified aero fairing that broke cover. Suzuki’s Sylvain Guintoli, fresh from being announced as Joan Mir’s replacement for the British Grand Prix, ended the day just over a tenth adrift of Pirro in fourth.

KTM’s Mika Kallio was again the first rider out on track on Tuesday to the delight of the Finnish fans in attendance, and he completed the most laps of the day: an apt 36. Yamaha’s Jonas Folger was just a tenth behind Kallio, with all six riders separated by just over a second and a half.

That's it from the second and final day of testing in Finland, with data gathered for both Michelin and the factories alike and work now continuing to prepare for the track's future debut on the MotoGP™ calendar.

"For MotoGP the track is quite tight, the first part of the track, the first five corners are really nice, and Sector 3 I like a lot. But Sectors 2 and 4 is quite tight. I like it because it's different, in the World Championship it's important to have different circuits and a different challenge for the riders."