Second-best result of the season for Smith in Japan 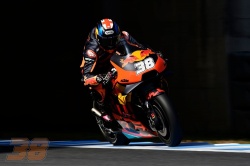 Bradley Smith rode his Red Bull KTM RC16 to 12th position around the sun-kissed corners of the Twin Ring Motegi circuit for his second best classification of the 2018 MotoGP campaign.

In contrast to Red Bull KTM’s wet debut experience with the hard braking and acceleration of demands of the Twin Ring Motegi circuit in 2017, the sixteenth round of the 2018 season took place in sunny and warm conditions in central Japan. Marc Marquez clinched the win and the MotoGP crown but it was a positive weekend of work and achievement for the team as both riders brought home points for the first time since the Grand Prix of Italy at Mugello.

Bradley aunched from the fifth row of the grid with his KTM RC16 for the 24 lap race that begun in the early hours of Sunday morning CET. The lap-times were very close and the gap from the leaders to the middle of the pack hovered around the 10-15 second mark for the opening phases of the Grand Prix chase. Smith followed Danilo Petrucci for most of the race and then had to scrap with Hafizh Syahrin. Another position was gained thanks to Andrea Dovizioso’s penultimate lap crash but Smith just lost out to Franco Morbidelli on the last circulation.


Bradley Smith (Factory Rider MotoGP):
“We were fighting for tenth position for quite a long time but in the last eight laps I just seemed to struggle a little bit with the Medium rear with edge-grip and Hafizh could catch me quite easily. I tried a little bit too hard into Turn 11 with Franco and ran wide. A bit frustrating to finish 12th in the end but it is some good points and KTM were strong here, and all weekend. We got some good data because I ran the Medium and Pol the Soft so we can look at the positive and negatives. Now to Phillip Island and last year there was good for us. We were competitive all weekend and it is one of the stronger tracks for us.”


Mike Leitner (Team Manager MotoGP):
“We have to be happy to have both riders in the points again. Bradley did a solid job and we are happy with his 12th position but his mistake in the hairpin allowed Franco to catch him. He gave his maximum. Pol finished his first race in the points since Assen and after his long rehabilitation. I’m really happy to see him back in the pit after the race with some points and no issues. I think he will be stronger in Phillip Island. We didn't have any technical issues in the race and this shows that we, and everyone at KTM, are working hard and we are getting better and better. Everybody knows that this class is very competitive. We would like to get inside the top ten; that is still a big target this season. Let’s go to Phillip Island and try to get it.”


The Grand Prix of Australia at the fabulous Phillip Island circuit will stage round seventeen of 2018 MotoGP next weekend as the series then moves to Malaysia and back to Europe and Valencia, Spain for the last dates on the calendar.