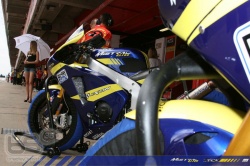 Bradley Smith once again demonstrated the high level performance of the Tech3 Racing Team's Mistral 610 Moto2 machine in Catalunya today after he qualified on the second row of the grid at the challenging Montmelo circuit.

Smith has been one of the fastest and most consistent riders on track all weekend and he was in blistering form this morning, the 20-year-old ending free practice in a morale-boosting second place on the combined timesheets.

Smith was only denied the fastest time in practice by 0.041s and his fantastic form continued in this afternoon's qualifying session, which took place on a dry track as forecast rain showers never materialised.

The British rider was lying in second place and preparing to mount a challenge for his first Moto2 front row start when he suffered an unfortunate crash at the final corner with 18 minutes remaining. His Mistral 610 machine suffered extensive damage and Smith was unable to complete the session. Highlighting just how impressive his speed earlier in the session was, Smith still secured sixth place on the grid for tomorrow's 23-lap encounter, which is round five of the 2011 Moto2 World Championship.

Bradley Smith 6th 1.47.207 – 11 laps:
"The second row is a good result for tomorrow, particularly when you consider I didn't even ride at the end of the session when I know I could have gone faster. Unfortunately we had a crash in the last corner and it is a bit of mystery what caused it. I don't personally think it was my own fault but we need to check everything on the bike as it was a big crash and the mechanics will have a lot of work to do. Now we have to check the data to find the reason of the crash and understand in which direction we want to go to for tomorrow. We need to improve a little bit in some small areas for the race tomorrow. I need to be faster in the first few laps but we have a really good pace for the middle to the end of the race on worn tyres. I'm still confident of another good result tomorrow and hopefully that will give me a big confidence boost heading to the British Grand Prix next weekend, which is a massive race for me.”