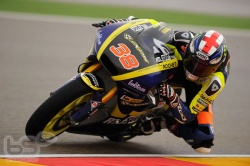 Tech 3 Racing Team rider Bradley Smith put himself in with a great chance of battling for his first Moto2 podium of the 2012 World Championship after a brilliant qualifying performance this afternoon at the Motorland Aragon track.

The British rider will start the 21-lap race from eighth position on the grid after a typically closely fought qualifying session on a full dry track.

After rain had dominated most of practice, Smith and his Tech 3 Racing crew quic kly got down to work and concentrated on finding a dry race set-up with the competitive Mistral 610 machine.

The 21-year-old was in contention for the top six throughout and his best time of 1.54.899 on his final flying lap was only 0.022s behind World Championship leader Marc Marquez in seventh. He was less than 0.3s off the front row and Smith is confident that he has the speed over the full race distance to challenge for the rostrum.

Bradley Smith 8th 1.54.899 – 20 laps:
“We have got to be happy with today because after all the disruption with the rain the Tech 3 Racing Team did a great job to set the bike up quickly for the dry track. Right from the start I had a good feeling with the bike and to be honest the way it went I am a little bit disappointed that I wasn't on the second row. That would have been better because the first corner here is so tight and the further you are up the grid the less chance you have of being caught up in any drama. Everybody is still going to start the race guessing a bit on the set-up and wondering how the tyres will perform as the race develops. But I know we have a good package for tomorrow and I am going to be read y to fight and see if I can get involved in a battle for the podium.”