Smith back in top 10 after epic Brno battle 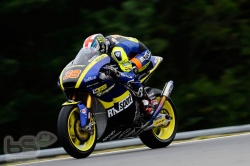 Tech 3 Racing Team rider Bradley Smith stormed into the top 10 for the eighth time this season after the British rider played a starring role in a thrilling battle in today's 20-lap Moto2 race at the Brno circuit.

Under grey and gloomy skies, Smith immediately surged into contention for the top 10 from 15th on the grid.

In a typically pulsating Moto2 battle, Smith became locked in a group of eight riders battling for fifth position and the fight continued right until the chequered flag in front of a huge crowd in the Czech Republic of almost 140,000 fans.

The 21-year-old had fought his way superbly into ninth place starting the final lap and he then conjured up another masterful overtake to seize eighth from Mika Kallio. Smith finished just over 0.5s away from Simone Corsi in fifth and just 2.5s split the eight-rider group at the end.

Bradley Smith 8th – 77 points:
“Sitting on the start line today I was a little bit worried to be honest. I was 15th on the grid and not 100% sure the direction we had taken with the set-up was the right way. It wasn't too bad and throughout the whole race I was involved in a really exciting battle. There was lots of overtaking but I lost a bit of time when I tried to pass Zarco and on the next lap I had a problem with the clutch and that cost me some more tenths. I think if I could have got to the group battling for fifth a little bit earlier I might have had a chance to gain some more places. But I'm still pretty satisfied with the outcome of the race and it was important to bounce back quickly from the bad weekend we had in Indianapolis. Being back in the top eight is a strong result and now we can look forward to Misano to try and build up some momentum for the final part of the Championship.

Herve Poncharal – Team Manager:
“After the disappointment of Indianapolis I am pleased to see the whole Tech 3 Racing Team has bounced back strongly with a good race today. Bradley showed a lot of determination and it was great to see him involved in such an exciting battle. I think if he had been a bit higher up the grid he might have been able to battle with the leading four because his lap times were as fast and consistent as those at the front. Eighth position is still a positive result and he was very close to the top five, so it seems we have quickly got our season back on track. Bradley again showed the high potential of the Mistral 610 machine and I think it is realistic to think he can be on the podium before the end of the season.”