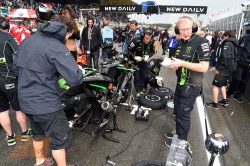 Bradley Smith completed a challenging race for the Monster Yamaha Tech3 Team in Assen by crossing the line in 8th after enduring the unpredictable Dutch weather for round 8 of the 204 MotoGP World Championship.

The beginning of the Iveco Daily TT Assen was delayed due to a sudden downpour of rain as the bikes lined the grid in front of 90,000 excited Dutch fans in what turned out to be the first wet race of the 2014 MotoGP season.

Bradley Smith began his 26 lap sprit around the legendary 4252 metre circuit from the last grid slot of the second row before holding 8th place during the opening lap as he intrepidly powered through the rain and over the damp track surface. The historical Assen circuit proceeded to dry rapidly forcing the young British rider to enter the pits to change bikes on lap seven. He then re-joined the race and set into an incredibly competitive rhythm aboard the Yamaha YZR-M1 and in the final stages of the race he was the fastest MotoGP rider on track, also producing the 3rd fastest race time on his final lap as he just missed out on P7 by a tenth of a second.

Bradley Smith: – Race: 8th – Championship: 10th – Points: 48
"Overall I am pleased with my performance at the end of the race even if the position is not what I'm aiming for. I was very comfortable with the bike once the track had dried and my race pace would have seen me within top 5 if not on the podium. Unfortunately at the same time today was quite a frustrating situation. The bike didn't work too well in the rain and I lost so much time at the beginning because of these wet conditions. I decided to follow Jorge's judgement on the pit stop and remained out for one more lap with him which was definitely the wrong decision as I lost approximately 10 seconds during that lap and when looking at the time sheets now, I would have been able to fight for 4th position with Aleix had I not lost that time. However when I rejoined the race the bike was awesome in the dry. The team did a great job but it's still just a bit irritating to end up in this position after such a solid end to the race in terms of pace. So unfortunately the result doesn't justify our efforts but we've worked really well this weekend and I go hard from the beginning to the end and look forward to giving it my all next round in Germany"

Hervé Poncharal - Team manager:
"What a bizarre race it was today, with uncertainty from the word go with regards to tyre choices. Whilst Bradley decided straight away to start the race on wet tyres, Pol took the gamble along with Valentino to commence the race with a dry setup. But the returning rain and the lack of time until the start, saw them change their minds and Pol had to start from the back of the grid. He was still able to finish the first lap in 14th position which was close to his grid spot. Of course, the task today has not been an easy one for him facing the wet conditions for the first time in MotoGP. In addition, It has probably been his high expectations which made him push a bit too hard after swapping back to the dry bike to cause an unfortunate mistake which prevented him from finishing the race. A real pity after his strong performance over the whole weekend. Bradley on the other hand, did a brilliant job especially during the last part of the race where he was clearly the fastest rider on track. Probably his strategy was not the most fortunate one today which hindered him from collecting an even better, but clearly deserved, result here in Assen. However we leave the Netherlands knowing where we must improve and anticipate the next round in Germany with keen excitement so both of our boys can show what they can achieve."