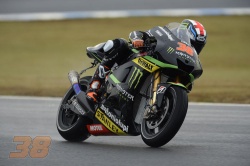 After both practice sessions were cancelled in wet and foggy conditions yesterday, FP3 and FP4 were also unable to take place earlier today, with torrential rain creating several large patches of standing water around the 4.801 km circuit.

Mist in the vicinity of the track also prevented the essential air ambulance from departing in the event of an emergency evacuation, though fortunately for the entire paddock and thousands of patient Japanese fans, conditions improved sufficiently enough for an extended qualifying session to be staged this afternoon.

Smith battled for grid position over an extended 75-minute session on a full wet track, though the earlier heavy rain stopped and track conditions improved throughout.

The intervention of the weather made Smith’s MotoGP debut in Yamaha’s all-important home round a tricky challenge, but the impressive 22-year-old acquitted himself superbly and gradually built up his confidence to challenge for the top 10 throughout.

He was confident he could challenge for a place on the third row until a small front brake problem meant his best time of 1.57.114 left him in 13th position.

After the weekend’s weather disruption, Smith will take part in a 50-minute practice session at 9:40am local time tomorrow morning, which takes the place of the regular 20-minute warm-up ahead of a 24-lap race that is expected to take place in the best conditions of the weekend.


Bradley Smith 13th 1.57.114 – 23 laps:
“In my first run I felt surprisingly comfortable on the Bridgestone rain tyres because I don’t have that much experience on them. The grip in the wet on this track is unbelievable and you can see that when Lorenzo is only eight seconds off the dry lap record. I was up to seventh and feeling optimistic that I could stay around that position but at the end of the session I had a small front brake issue and it was hard to stop the bike. With six really hard braking points here that cost me a lot of time and I think my pace was much quicker. It will be a difficult race starting from 13th and it looks like it will be dry tomorrow, so hopefully our base setting will work because we only have 50 minutes in practice to work on the race package. It has been a difficult weekend for everybody concerned but the Japanese fans have been incredible in waiting to see us on track. Tomorrow is a huge race for Yamaha in Japan and I will be giving it my all to get a positive result.”